Contrary to MBF being known as a problem solver, I came across several troubleshooting sessions with very weird connectivity and routing issues that I as actually able to fix by disabling MBF. Read about one example in my article about NetScaler services flapping with Hyper-V.

To further understand the problem in multi-arm deployments and the reason why MBF helps we need to ensure that we “think networking device” here.

Unlike a multi-arm Windows Server for example, NetScaler can be utilized as a router and will always behave like one. Means it will always take the shortest route, regardless of the interface on which the the user actually just requested a VIP for example.

If we take a sort of typical network architecture similar to the following and look at the traffic flows we can see one challenge: Where do we put our routes to the Client network?

If we point the route towards the management network we’ll mess up the traffic to the server network and the same applies to the other direction.

MAC-Based Forwarding solves this by simply answering back to wherever the request came from. While that works in 95% of the cases it can create problems in more complex networks that I’ve outlined in the mentioned article about NetScaler services flapping with Hyper-V.

To solve this challenge in a neater way we can utilize Policy Based Routes (PBRs) instead.

While regular routes allow routing decisions only based on the target, Policy Based Routes allow to consider other factors like:

So what we can do is define Policy Based Routes instead that will overwrite the regular routing table and force the respective traffic flows to be routed to their appropriate gateways.

This can be done by creating one PBR for each of the attached networks with the following simple parameters: 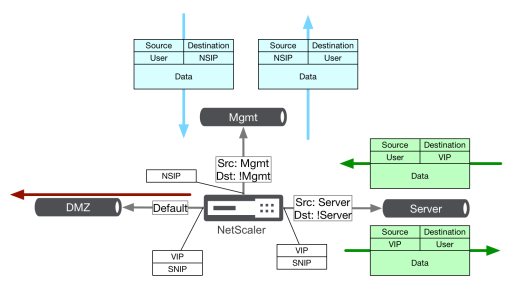 If you think about it, this solves all the challenges: Paket that need to be routed will be routed to the appropriate gateways, non-routed packets will be handled by the existing “direct-connected” routes.

The configuration is pretty simple, in the above scenario I’d configure the routing as follows (filled with some sample subnets)

This site uses Akismet to reduce spam. Learn how your comment data is processed.


I work as a consultant for network-infrastructure and security with a strong focus on Citrix solutions.

Currently I’m based in Germany working for Makro Factory, a Platinum Solution Advisor for Citrix.